Three out of ten British people are now ‘very worried’ about their ability to pay household bills, according to the latest cost of living report from Consumer Intelligence.

The proportion has reduced from its 35% peak in late August, following the announcement of the energy price cap on 8 September. It does, however, remain higher than it was over the summer. The survey was conducted on 25 and 26 September, and will not reflect the full impact of mortgage rate rises following the Chancellor’s Growth Plan announcement of 23 September. 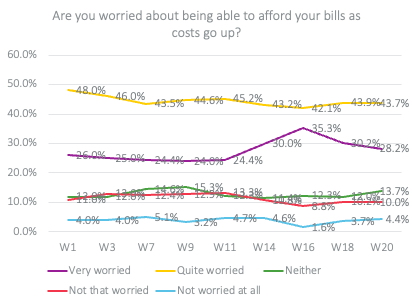 And it’s not just the worry. The number of people who have already cut back on spending has reached a new high of 75%, while half the population now reports having cut back on heating.

So far, the insurance industry has been lucky, coming towards the bottom of the list of cuts people have started to make, or are planning to make. But the latest figures suggest it’s not immune. Seven per cent said they had cut back on insurance costs in the last three months, while those thinking of cancelling or trading down insurance is up to 7.5% from 6% in June. It’s not a huge statistical leap, but in real terms, it means around 2 million customers looking to slash their insurance spend.

Meanwhile, after a surge of holidays in summer 2022, it’s worth noting exactly how many people are putting off their next one. 32% are going to cut back on holidays in the future, and 28% will be driving less – both of which could also have an impact on insurance – and in particular on new business volumes.

Other lifestyle milestones being delayed include having a baby, 4%, buying a new car 9%, house purchases, 6%, and house renovations, 16%.

What Can Your Real Estate Investor Clients Expect in 2023?

See why preventive care is important and what services are available to you.

Aon CEO reveals the path to success for young people

Remember to update us when your income & household changes